Turmeric is native to Southeast Asia and is a member of the Zingiberaceae or ginger family. It has been used as an herbal remedy for thousands of years in Indian Ayurvedic and Chinese medicine.

India grows 78 percent of the global supply of turmeric. A range of turmeric teas are available for purchase in health stores or online. In this article, we look at a range of potential health benefits.

What is turmeric tea

Curcumin has low bioavailability, which means the body has a hard time accessing and absorbing the compound. For this reason, turmeric supplements, with their guaranteed high concentrations of curcumin, are popular.

Turmeric tea, brewed using grated turmeric root or pure powder, is considered one of the most effective ways to consume the spice.

There is no specific recommended daily intake of turmeric. Based on available research, the suggested daily intake depends largely on the condition it is being used to treat.

Most research in adults supports the safe use of 400 to 600 milligrams (mg) of pure turmeric powder three times daily, or 1 to 3 grams (g) daily of grated or dried turmeric root. Grating the turmeric yourself is the best way to ensure a pure product.

Turmeric is a bright yellow-orange spice commonly used in curries and sauces. It comes from the turmeric root. The spice has been used for its medicinal, antioxidant, and anti-inflammatory properties for thousands of years.

Turmeric tea is one popular form of consuming turmeric. It has a unique but subtle flavor. The tea is also great way to reap the following health benefits of turmeric.

Turmeric tea’s strong anti-inflammatory properties can help ease inflammation and swelling in people with arthritis. This reduces painful symptoms. One study found that an active compound in turmeric, called curcumin, was effective in reducing pain in patients with osteoarthritis.

While research is still searching for what exactly causes Alzheimer’s disease, it seems as though the curcumin found in turmeric may help prevent it. Turmeric’s antioxidants prevent damage that can lead to Alzheimer’s. Even more importantly, some research shows that turmeric can reduce the synaptic marker loss and the accumulation of amyloids linked to Alzheimer’s development.

Turmeric tea’s many medicinal properties, including antioxidant and anti-inflammatory properties, could contribute to cancer prevention. The National Cancer Institute has recognized curcumin as an effective anticarcinogen, or substance that helps prevent cancer.

Ulcerative colitis (UC) is a chronic condition that causes ulcers in the lower end of the gastrointestinal tract. Turmeric could help maintain remission from symptoms. According to the University of Maryland Medical Center, a study found that UC patients in remission had significantly lower relapse rates if they consumed turmeric. 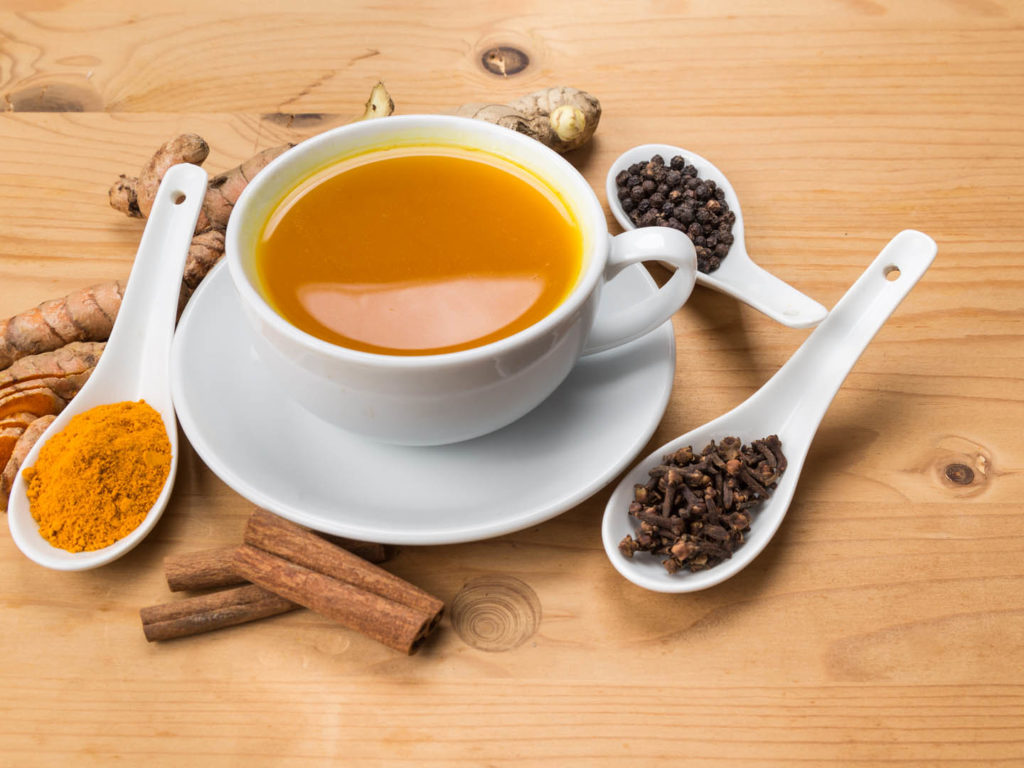 Lowering LDL (or “bad”) cholesterol can help reduce your risk of developing some serious conditions, including heart disease and stroke. There is evidence that turmeric is effective at doing just that. For example, a 2008 study that found that a low dose of curcumin was associated with reduced LDL and total cholesterol levels.

Uveitis is an inflammation of the iris. Some early research has indicated that curcumin found in turmeric may actually be as effective of a treatment as corticosteroids, but without the side effects.

Traditional medicines have used turmeric for diabetes for thousands of years. Several studies using animal and human models have shown that curcumin supplementation may have anti-diabetes properties.

Researchers suspect that the anti-inflammatory and antioxidant properties of curcumin may help reduce the symptoms of chronic or long-lasting lung conditions.

A 2017 medical review concluded that although the clinical evidence is limited, curcumin might help treat asthma, pulmonary and cystic fibrosis, lung cancer or injury, and chronic obstructive pulmonary disease (COPD).

Curcumin has long been used in traditional medicines as a treatment for many digestive conditions.

Several studies have found that curcumin may help reduce the pain associated with IBS and improve the quality of life of those people with the condition.

A 2012 study in rats found that curcumin helped decrease the time it took for food to empty from the stomach to the small intestine, otherwise known as gastric emptying. 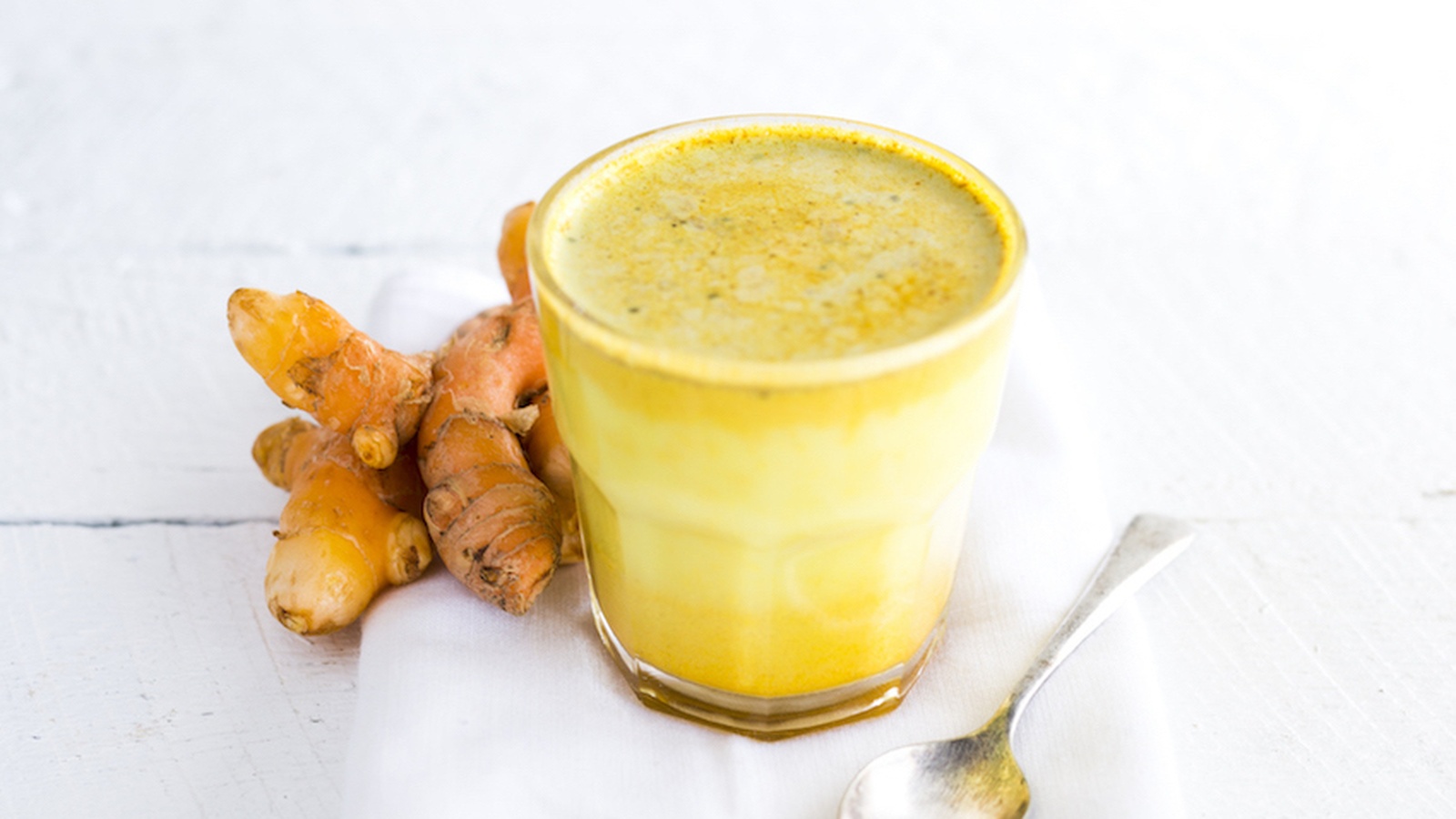 How to make turmeric tea

To make turmeric tea at home, follow these steps:

Turmeric is generally safe as long as you consume it in moderation. You should check with your doctor about drinking turmeric tea if you have had:

Taking too much turmeric may cause side effects, however. These include:

Because turmeric may thin your blood, you should stop drinking turmeric tea two weeks before surgery. Do not take turmeric tea if you are on blood thinners, either.

Who should drink turmeric tea?

Turmeric tea is considered safe for most people to drink. It can relieve pain and inflammation without the side effects that even over-the-counter medications like NSAIDs can cause, such as internal bleeding, ulcers, and reduced white blood cell count.

Almost anyone can benefit from drinking turmeric tea, especially because it can boost the immune system and act as an anticancer agent. People with pain caused by inflammation can perhaps benefit the most. People who have diabetes or who take blood thinners should talk to their doctors before trying any turmeric supplement, however.