BEET can be used in neurological diseases!

Wake Forest researchers have shown for the first time that drinking beet juice can increase blood flow to the brain in older adults – a finding that could hold great potential for combating the progression of dementia. “There have been several very high-profile studies showing that drinking beet juice can lower blood pressure, but we wanted to show that drinking beet juice also increases perfusion, or blood flow, to the brain,” said Daniel Kim-Shapiro, director of Wake Forest’s Translational Science Center; Fostering Independence in Aging. “There are areas in the brain that become poorly perfused as you age, and that’s believed to be associated with dementia and poor cognition.”

On the first day, the study subjects reported to the lab after a 10-hour fast, completed a health status report, and consumed either a high- or low-nitrate breakfast. The high-nitrate breakfast included 16 ounces of beet juice. They were sent home with lunch, dinner and snacks conforming to their assigned diets. 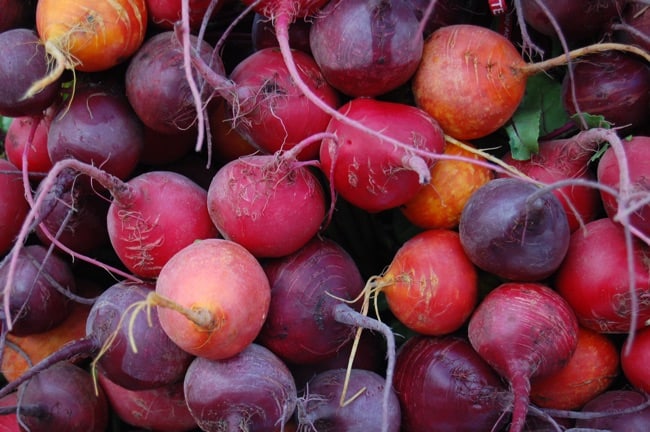 The next day, following another 10-hour fast, the subjects returned to the lab, where they ate their assigned breakfasts. One hour after breakfast, an MRI recorded the blood flow in each subject’s brain. Blood tests before and after breakfast confirmed nitrite levels in the body.

For the third and fourth days of the study, the researchers switched the diets and repeated the process for each subject.

The MRIs showed that after eating a high-nitrate diet, the older adults had increased blood flow to the white matter of the frontal lobes – the areas of the brain commonly associated with degeneration that leads to dementia and other cognitive conditions.

“I think these results are consistent and encouraging – that good diet consisting of a lot of fruits and vegetables can contribute to overall good health,” said Gary Miller, associate professor in the Department of Health and Exercise Science and one of the senior investigators on the project.

Taking this research to the next stage, Wake Forest University researchers conducted studies to understand how nitrite, for which beet juice's nitrate is a biological precursor, could be utilized to improve conditions such as hypertension, heart attack and stroke. This area has already been the object of worldwide research studies. New research from Wake Forest University has potentially moved the science one step closer to this goal.

In a paper published in the Journal of Biological Chemistry, senior co-author Daniel Kim-Shapiro, professor of physics at Wake Forest, and others show that deoxygenated hemoglobin is indeed responsible for triggering the conversion of nitrite to nitric oxide, a process that affects blood flow and clotting.

“We have shown that conversion of nitrite to nitric oxide by deoxygenated hemoglobin in red blood cells reduces platelet activation,” Kim-Shapiro said. “This action has implications in treatments to reduce clotting in pathological conditions including sickle cell disease and stroke.”

In 2003, Kim-Shapiro collaborated with Mark Gladwin, now at the University of Pittsburgh, who led a study that showed that nitrite (which is also used to cure processed meats), is not biologically inert as had been previously thought, but can be converted to the important signaling molecule nitric oxide (NO), and thereby increase blood flow. At that time, the researchers hypothesized that the conversion of nitrite to NO was due to a reaction with deoxygenated hemoglobin in red blood cells.

The main goal of the latest research, Kim-Shapiro said, was to determine how red blood cells perform these important signaling functions that lead to increased blood flow. The researchers used several biophysical techniques to measure NO production from nitrite and red blood cells and examined the mechanism of NO production.

“Importantly, this action was increased under conditions of low oxygen – so nitrite acts to increase blood flow in the body just when it is needed. What we’re showing with this research is what part of the red cell is doing this, and it’s consistent with our original hypothesis,” he said. “This speaks to the mechanisms and how they work – to how nitrite is dilating blood vessels and reducing clotting.”

Looking for a perfect companion for your daily lifestyle? Check out Vahana Health now and be Healthy today! Find out more: https://vahanahealth.com/products/combo-of-2